Irusan, aspect of the Irish King of Cats, channels a dark ritual in a time-lost Stonehenge.
Click to view.

Something’s gone wrong with the cats of the world, and a nefarious aspect of Irusan, King of Cats, works terrible magics in a time-lost Stonehenge.

Irusan was a collaboration between myself and senior designer Tanya Short for the Halloween seasonal event.  She designed the seasonal event and its surroundings, including the main villain, Irusan, featured in this encounter.  She wanted the fight in Stonehenge to take place both in the day and at night, and I designed and implemented the encounter based on these time-shifts and Irusan’s cat-like nature. 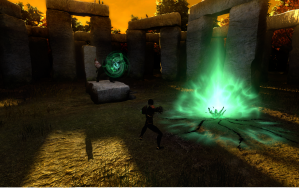 As a seasonal event, Tanya and I agreed this encounter should be challenging but fun, and accessible to undergeared or underpowered players.  In trying to keep with that idea, most of Irusan’s attacks can be dodged by quick players.  This lets weaker players participate in the fight by playing skillfully.  In having just one version of the fight for all players, some of our more skilled players felt the fight was actually too easy.  Future seasonal bosses would reflect this, featuring both a normal mode for low power players and a nightmare mode for our end-game, high power players.

Irusan’s attacks are a combination of voodoo and cat-themed abilities; he can curse the ground, making it dangerous to stand on, and his cat-scratch knockback attack is even more dangerous in combination.

The area transitions from daytime to night time multiple times, with the ritual at night visibly increasing in power every time, giving players the sense of a race to stop this villain.